Previously I wrote about Wander, the 1974 mainframe text adventure game-creation system by Peter Langston, which was recently rediscovered. 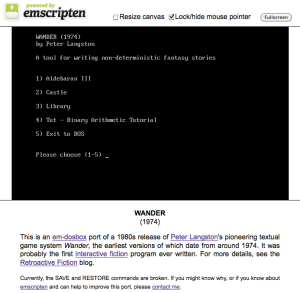 You can now play Wander online.

This em-dosbox repackaging of a DOS port of Wander was created by me, using blunt instruments. (I broke the SAVE and RESTORE commands, for example.) Please contact me if you know how to improve my rather crude hack.

Which came first? Wander or ADVENT?

Some of the Wander “worlds” that were recently recovered are 1980s versions, and include features that were added in response to ADVENT. (Peter Langston was apparently a member of the “UNIX Adventure Tastefulness Committee”, which was convened to sort out “Various design questions” surrounding the conversion of ADVENT to UNIX.)

But the very first versions of Wander – which are still lost – date from 1974 or earlier, so you can’t help asking yourself (or at least I can’t) if Wander might have been an influence on the development of ADVENT, which was always thought to be the first work of interactive fiction on a computer.

Was Wander distributed widely enough for Will Crowther and/or Don Woods to have had the opportunity to see it before they wrote ADVENT?

If the answer is no, then that does that mean there’s something fishy going on? Surely two people couldn’t independently have come up with the idea of a textual game of exploration where you navigate using compass directions?

Um, why not? What else would you use, if not NORTH, SOUTH, EAST and WEST? Well, actually, you might use LEFT, RIGHT, FORWARD and BACK – and there is at least one game that does: The Secret of Arendarvon Castle (of which more later).

Okay, so it is possible to make a text adventure game with a different set of navigational commands, but compass directions are probably easier for the player to use and for the programmer to implement. Also, for Will Crowther, compass directions might have been the natural choice when he was writing ADVENT because he was a caver who used a compass to map out underground cave systems in real life.

But what about Peter Langston? If he started working on Wander in or before 1974, did he implement compass directions from the beginning? We may never know – unless the earliest source code is found, which seems unlikely. (But perhaps Jason Dyer’s forthcoming blogposts will dig up some interesting artefacts from the code we already have.)

So, do we know anything else at all about the origins of Wander? Well, I did ask Peter that very question (before finally realising that I ought to leave him in peace now). His reply:

As to Wander’s inspiration, as I was writing other games, I got to thinking about the non-deterministic non-linear story experiments I had heard of the French doing in the 1920s, where the reader made choices that determined how the story went. I figured that fairytales like Rapunzel or science fiction like the Retief stories would be a good basis for such stories and computers would be the perfect way to present them, but it would require a great deal of programming skills along with the storytelling skills. So Wander was an experiment to see if the programming part could be made easier by pre-coding the common kinds of actions and consequences. I had the vague idea that I could make it easy to use and then coax some real authors like Robert Sheckley into writing some wanders. I never got that far, of course.

It’s a crying shame that we never got to see the words “A wander by Robert Sheckley” flash up on a computer screen!

I’m not sure exactly who the French writers that Peter refers to are. Raymond Queneau has been suggested for Un Conte À Votre Façon (1967), but that arrived several decades after the period indicated by Peter. If you have any other suggestions, please let me know.